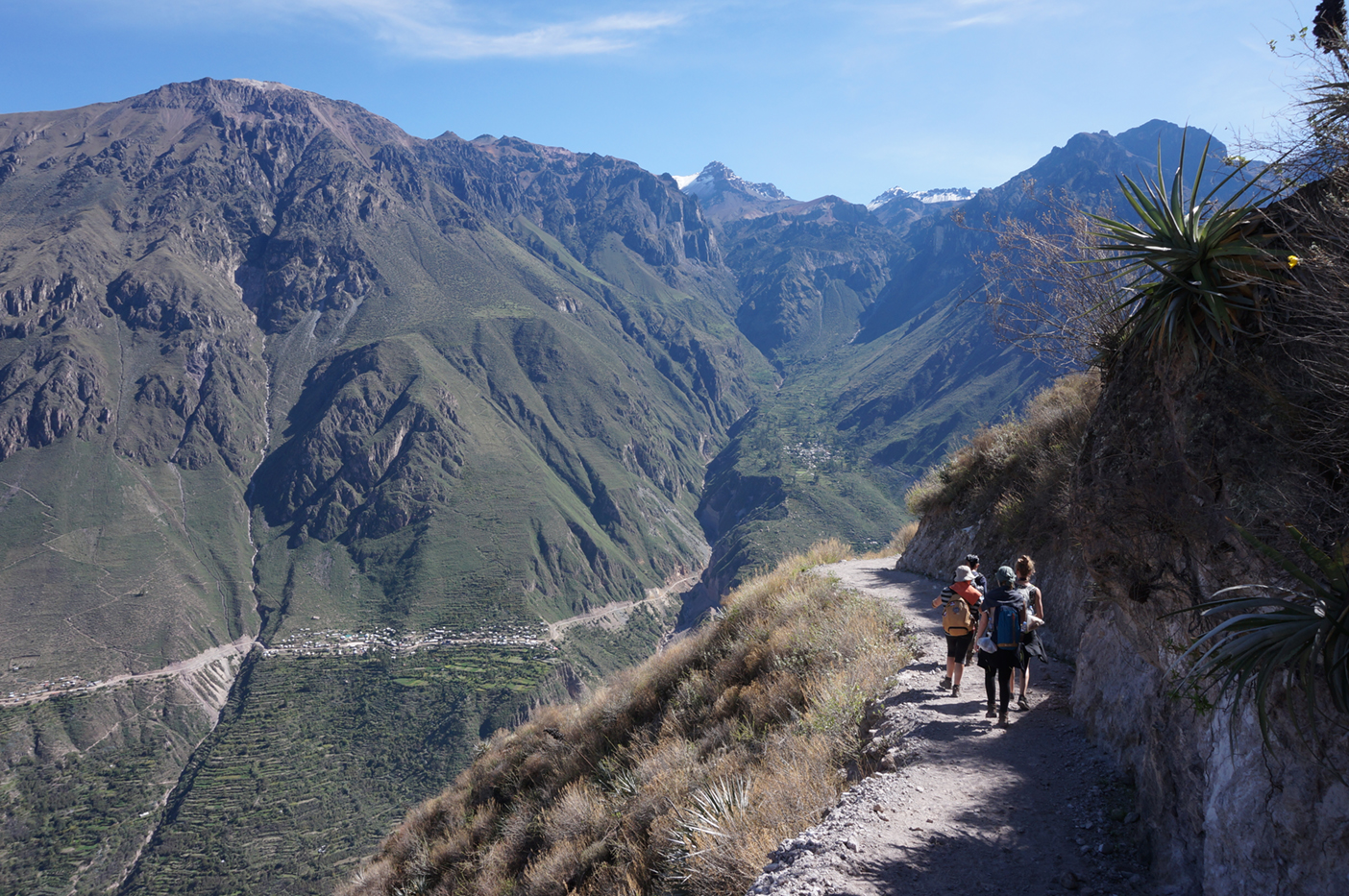 Let’s give credit where credit is due: Colca Canyon is a sight to behold. At 10,725 ft deep (3,270 meters) it is one of the world’s deepest canyons, more than doubling that of the US’s Grand Canyon.

Even without the sweeping, jaw dropping vastness of Arizona’s claim to fame, standing there along the rim of southwestern Peru’s epic, bottomless void at the Cruz de Condor vantage point, it’s hard to take your eyes off the beauty of Mother Nature’s impressive handiwork.

That is, unless you have a three and a half year old who’s suddenly decided she’s had just about enough of the five hour, mere morning portion of the day’s Arequipa to Canon Colca full day tour. And with another nine hours left for the return trip to play out before getting deposited back in the colonial center of the city of Arequipa, let’s just say Kaia was on to something.

This being the fact that fifteen hours on a bus for what amounts to a total of fifty minutes attempting to jostle prime photo real estate at the canon rim simply doesn’t make sense. And considering we’d decided to pay decent money and cram doing so in between an overnight sleeper bus to Cusco made even less…

But that’s another story altogether.

The fact is, the full day Canon Colca tour out of Arequipa starts with a 3 a.m. hotel pick up. Of course, this fact alone should be enough to give most rational thinking souls pause for concern. Especially souls with a three year old in tow. But considering we were literally next door (160 km/100miles) to one the world’s deepest canyons and the fact Kaia’s had more than proven her travel savvy to that point, we were up for the challenge. Or so we hoped.

So aboard we’d climb in the inky black, wee morning darkness donning shorts and light jackets with a still sleeping Kaia in our arms where our guide’s verbalized concern for our chosen attire fell on deaf ears. The fact was we were dressed for what seems to be norm for bus travel in much of South America. This being the pleasure of taking a seat amidst an oven like heat cranked full bore.

And this morning would be no exception with most of the day’s first three hour, breakfast stop run to Chivay spent pleading with our driver and guide to turn down the heat. This in direct contrast to the pleading of a Peruvian local layered up as if auditioning for a Shackleton Expedition re-enactment.

After an included breakky of bread, butter, jam, tea and juice it was back aboard from what hindsight says should be the day’s true starting point of Chivay. From there it’s two more hot and dusty hours over kidney jarring dirt roads to the day’s big Colca Canyon photo opp. A run that allows for a stop in the first of the day’s open air market like shopping strips in the shadow of the town of Maca’s white washed cathedral.

There locals hawk various alpaca attire, jewellery, and trinkits while offering the opportunity to pose with condors and llamas while off main street residents accost you for one sol ‘propinas’ for having snapped a quick spoof photo of their miserable looking burro, tied up out front a dishevelled, cinderblock abode that won’t be making the tour brochure anytime soon.

This ‘cultural exchange’ complete, the road opens up, winding through a mountain valley landscape that begs your camera’s attention around every corner.

But fear not. As the fact nearly two thirds of your day (nine whole hours) is spent backtracking, rest assure you’ll have more than ample time to snap away. As in what seems like every five minutes where, any roadside space wide enough to accommodate more than one bus becomes prime roadside stall real estate. Corners of capitalistic endeavour where without fail Murphy’s Law will undoubtedly put you in the presence of that one couple. People who, with the nonchalant aire of those on a private tour, insists on making an entire busload of people wait and extra 15 minutes each stop as they each take turns shooting countless variations from every conceivable vantage point.

Throw in an hour and a half buffet lunch (one we’d be forced to spend twenty minutes having to verify we’d in fact paid for), a steady diet of road side check points, an endless gauntlet of overloaded and slowly creeping trucks to navigate around, on often blind curves and, best yet, a good hour or more pushing through the soul killing sprawl of Arequipa’s afternoon traffic and, just like that, in the blink of an eye, your Colca Canyon full day tour mercifully comes to an end there in the heart of Arequipa’s tourism fuelled center.

A center awash in a steady barrage of travel tour agents waving various brochures every five feet. Agents who we’d do our best to wave off with as polite as humanly possible ‘been there, done that’ smiles all the while certain there had to be a better way to take in such a magnificent work of natural beauty.

And while Bec and I both agreed basing out of the little outpost town of Chivay seemed as practical a first step as possible to avoiding the pitfulls of the sort of encapsulated marathon day we’d just experienced, the fact was we had neither the time nor the energy to delve any deeper than that.

A last minute Workaway gig in Cusco (on the doorsteps of Machu Picchu) beckoned and, as such, a quick bite, packing up and getting to Arequipa’s bus station were all we were focused on.

Another bus and this time ten or eleven more overnight hours stretched out in luxurious reclining 160 degree ‘cama’ seats. Seats that guaranteed the sort of well-earned sleep that we could only hope would instantly banish the day’s slog.

And the sort of sleep that we hoped not even Kaia would be able to find fault with.

Things to Know About Koh-Lipe, The Most Beautiful Islands in Thailand